Driving in Japan is great and you should do it. So far I’ve driven four times in Japan and discovered new things every time. So before anything, there are some requirements: 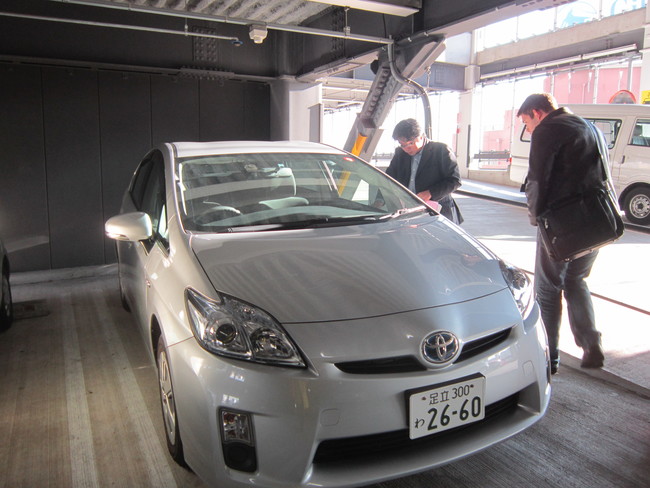 So first off, you need a way to obtain a car. That’s not so hard, you can rent one. You can simply go to your favorite car rental company, let’s say Avis and select Japan in the drop down; surprise: Japan is not there. In Japan, the leading rental companies are actually car manufacturers, such as Toyota, Mazda, Nissan… who rent the cars they produce. The big issue for people like me who don’t speak Japanese is that it’s really hard to rent a car off of their websites, which are not in English. Your only chance is to find an English-speaking company that has a partnership with a Japanese car renter. Europcar is one of them (http://www.europcar.jp), they have a partnership with Mazda. I noticed that Hertz recently started taking reservations for Japan but I can bet they have a partnership with a local company.

Make sure you pay extra for the insurance, which might run you around $10 per day. I’ve never damaged a car in Japan, but I sure don’t want to have to deal with paperwork in Japanese in the event that I did. 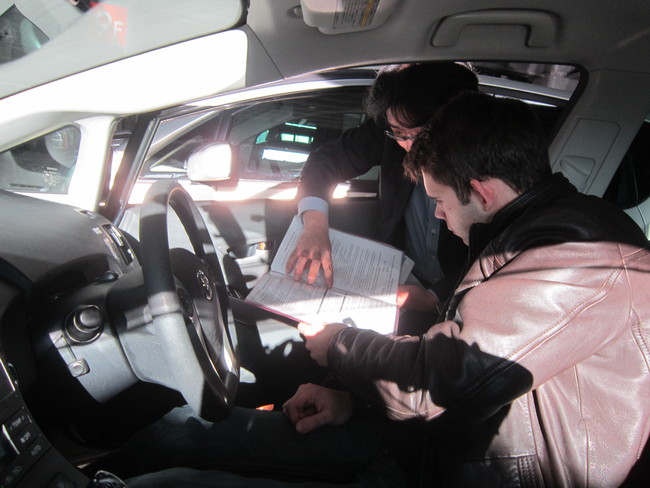 In Japan, just like in the US, most cars have an automatic gearbox. This is lucky because much of your attention will be needed on the road, switching speeds with your left hand could have added a dose of extra thrill. As you may know the wheel is on the right side; no change for the British, Australian or Hong Kong folks but much change for all the others. This also means all the commands are swapped, signal lights on the right and windshield wipers on the left. There’s nothing you can do about it, you’ll wipe your windshield at least 10 times before you get used to having the signal on the right side. Driving on the other side of the road usually takes 15-20 minutes to get used to, make sure you do a couple rounds in the parking lot before driving out.

Most cars in Japan (at least the rental ones) come with embedded navigation, so no worries if you don’t see the extra GPS option when you are selecting a car online. Finally, maybe not as important but you will notice something subtle about your rental car. Even though it looks perfectly like the Mazda 3 you know so well, it is not a Mazda 3; it’s a Mazda Axela and it comes with leather seats. Most Japanese cars are rebranded for foreign markets, which occasionally involves using lower quality elements, different names and different packages.

Unfortunately (starts off really well), the embedded GPS will only be in Japanese. So now, I’m not a dunce I can figure this out, a GPS isn’t all that complicated, just press the arrows and find the button that looks like a flag or something. That’s not happening either, there won’t be any icons or symbols besides Japanese symbols. One lucky part is that recently Japanese car renters have started to include a 1-page guide in English that helps you figure out which buttons to press to get to your destination. The really lucky part (my favorite), is that in order to get somewhere using a GPS in Japan, all you need is to know the phone number of your destination. Japan doesn’t have the Roman address system of road names and numbers, which poses a problem for GPS. There’s small trap though, you need to remember to prepend the number 0 in front of all local phone numbers, it’s like the 1 in front of US phone numbers or the 0 in front of French numbers, it’s always there so locals consider it to be implied and rarely display it but the GPS needs it. 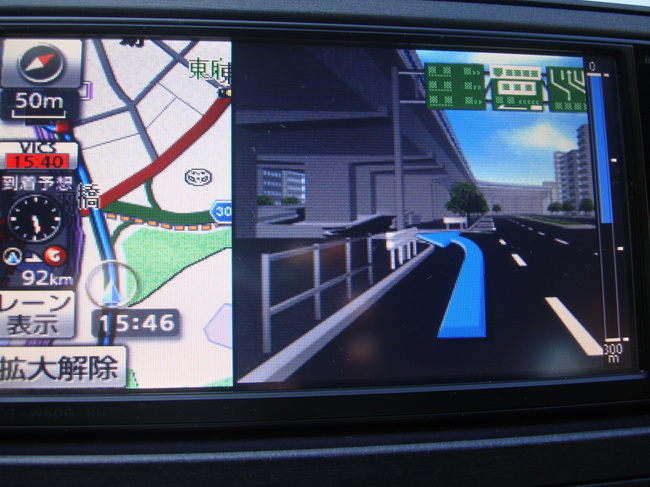 Road signs are always displayed in Roman letters, allowing you to at least verify that you’re going the right direction. 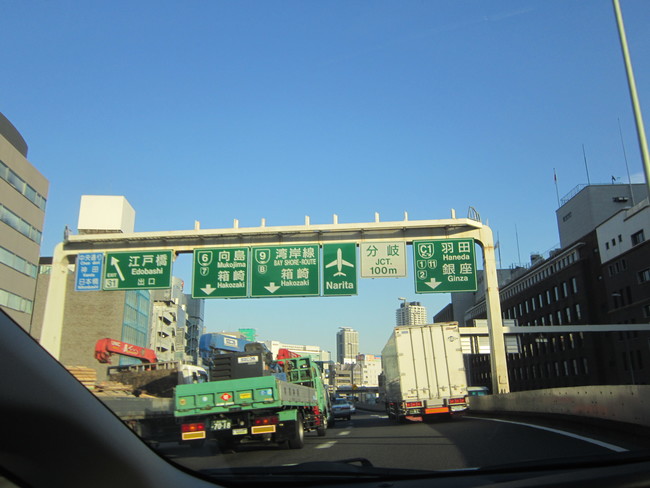 Highways in Japan are very expensive. They were built recently, they are extensive and haven’t been paid back yet. On a 200-mile trip (300km) you can expect to pay upwards of $50-$80 in tolls and that’s cash only. Some toll lanes will have bright colors, those are for subscribers of ETC or EPass and don’t take cash, do not take these lanes unless you are sure your car renter explicitly told you it is included in your car (it won’t be). Even if your rental car has a transmitter to pay for tolls electronically, it still requires that you are a subscriber and insert your personal card into the device (which you don’t have).

My understanding is that there are three types of parking lots in Japan, only one of which can be found in the West. The first one is the obvious: the parking garage; there’s a gate, you drive in and find a spot. Typically you’ll notice there’s a pay booth on both sides, that’s because a lot of Japanese people own imported cars that have the wheel on the left side. Another kind of parking is the kind that is most typical to Tokyo and Osaka, it is the underground automated parking. All you have to do is drive into what looks like a single spot garage but is in fact an elevator, get out of your car and a valet will take it from there. Your car will be taken underground by the elevator and parked for you. When you get out, your car will be in the wrong direction but have no fear, a round platform on the ground will rotate your car for you. The third kind of parking is the regular open-air parking lot. What’s so special about it you ask? it’s not attended. Pick a spot, drive your car into it and after a few seconds a metal plate lifts below your car and blocks your wheels. You can now walk away and when you come back, stop by the automated booth, enter your spot number and pay with your credit card to lower the metal plate and free your vehicle. 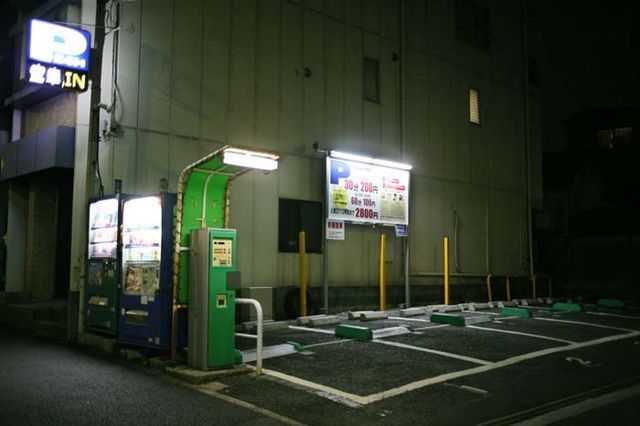 Most cars in Japan take gasoline and not diesel, that’s an advantage for European folks. Therefore it will be unlikely you’ll have to figure out how to say Diesel in Japanese, as any fuel grade most likely will work. Gas stations in large cities are a little different than in the West even though they are operated by western companies such as Shell or Exxon. The stations looks like concrete platforms with no pumps at all. As you drive in, you will be guided like an airplane by an attendant who will tell you precisely where you place your vehicle. After the attendant figures out you don’t speak Japanese and that he doesn’t speak English, he will take a look at your car and find out what fuel it takes. He then pulls a gas pipe from the ceiling and pumps the fuel into your car. Please note that highways never have fuel in rest/service areas so fuel up while in the city. 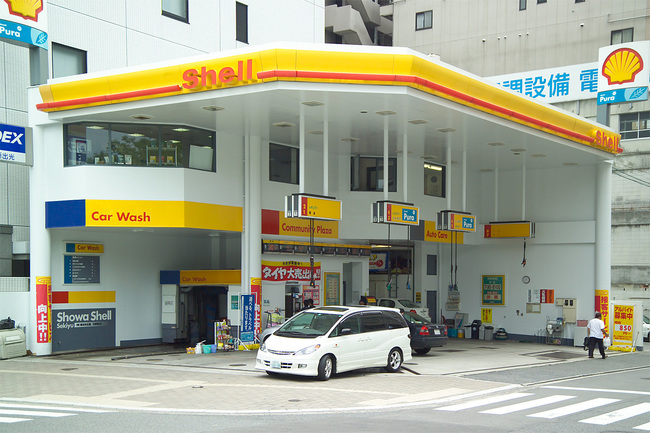 This may be out of the scope of this post but one important thing to know is that in Japan most ATM’s do not take foreign cards. Yes, I know, the ATM says it takes Visa and MasterCard, I tell you: look closer. Visa and MasterCard have a Japanese network that is restricted to Japan. Unless your card was issued by Visa Japan or MasterCard Japan, you’re out of luck. Your only chance to get cash is to visit a 7/11 store. Those stores are numerous in large cities and have what they call “international ATM’s” that take foreign cards. The reason I bring this up is because when you travel by car, your cash will drain fast both on tolls and on rural restaurants and stores that don’t take electronic payments. Also, it is unlikely you will find a 7/11 in rural areas, so make sure to stock up on Yen before leaving the city. Also, Okinawa has no 7/11 (I drove all around the island).

So the gist of this, why rent a car in Japan? It is fun because it’s just the right amount of challenging, which is a fantastic experience to have but beyond this it allows you to visit locations that are usually unreachable by other means unless your pockets are deep enough to pay for a private driver. One great drive is from Tokyo to Hakone, which I have done a couple times. There’s not much to see until you get to Hakone, where you can sleep a night at a Ryokan (traditional Japanese hotel) and enjoy hot springs, drive around Mount Fuji and maybe stop at a combini for some fast food. I’ve also rented a car in Okinawa, the tropical Japanese island located close to Taiwan. I drove around the entire island, stopped at restaurants I’d never be able to find without a car, especially considering that public transport covers only a small fraction of the island.

Be aware of the law in Japan:

The above is subject to change, don’t take my word for it and check the local law before traveling.

Find All Images With Given Attributes

I’m an iOS developer and with the release of Xcode 8 came a little issue. Apple introduced wide-color support on iOS 9. This meant that if you had 16 bit images then you couldn’t target older iOS versions, otherwise you would see... Continue →