I met Don Knuth in 2007 when I was 17. He owed me $2.56 and I wanted to trade my finding for the check in person, with the hope that I could shake his hand and maybe get a couple books signed.

Dr. Donald Knuth is a famous Computer Scientist and professor at Stanford University. He is most well-known for writing The Art of Computer Programming, as well as implementing TeX.

Dr. Knuth has written a lot of software and would usually reward people for finding bugs in his programs. The reward is one hexadecimal dollar (0x$). Unfortunately $256 is a lot so the reward is actually $2.56. Every time someone finds a new bug, the reward doubles. Don Knuth also rewards people who find mistakes in his books.

I really wanted to get my hex dollar and finding a bug in his programs is no easy task. Finding errors in his books isn’t much easier, especially when your native language is French and you’re 17. There is one other way to get rewarded, by helping out on tasks that Dr. Knuth has no time for: Help Wanted

The primary kind of task that Dr. Knuth needs help with, is finding the complete names of the people he cites in his books. Citing someone with their middle initials simply isn’t enough. It’s true there’s a lot of John Smith’s and if we could have his middle name it would be much more precise. Dr. Knuth provides all the information he can on these people to make it easier to find them. The problem is that usually these people have been dead for quite a while and one can’t just find their phone number and ask them the question. Additionally Don Knuth requires some reasonable proof that it is the right person. Finding the middle names of the people listed can take hours if not days. Sometimes it involves requesting death certificates, sometimes it’s the wrong John Smith…

I ended up finding a total of 4 people to date: find Thomas Lextrait on his rewards ranking page. When I found the 4th one, I thought that it was time to try something. As usual, I emailed Dr. Knuth to tell him about my finding but didn’t disclose it. It turns out I was going to be in Palo Alto a couple months down the road so I requested that he agrees to give me the check in person and assured him I’d bring irrefutable proof.

Don Knuth doesn’t respond to email electronically. His secretary prints out his email, he writes his response on the piece of paper using a pencil and his secretary mails it back to the sender. After a few weeks, I got my response scribbled on a print-out of my email. Dr. Knuth had agreed to meet with me, shared his phone number with me and offered to show me around his office.

A couple months later, I walked to his house close to Stanford. I found a very modern wood and glass house, knocked on his door and he opened. I was tall for a 17 year old, but he was much taller than I was. He walked me around his house, showed me the organ he assembled, showed me a few pictures hung on the walls and took me upstairs to his home office. Most of the walls of the house are actually floor-to-ceiling bookcases, filled with books. His office contained a small high desk, no chair. He explained that he likes to work standing because it’s better for his back. The ceiling was covered with neon lights, just a couple inches apart and providing powerful lighting. He then took me to a file room, where he kept all the documents he needed to write his next book. I recall seeing several hundred papers, documents, books, journals; all carefully organized into folders on shelves, all annotated and bookmarked.

We walked back to his office and I proceeded to divulge the middle name of the person he was looking for, and handed him an envelope containing the proof. He read it, took some notes on his computer and wrote me a check for $2.56. I had the second edition of The Art Of Computer Programming with me, and Don Knuth kindly accepted to sign every volume.

We walked downstairs, and his wife took this picture of us: 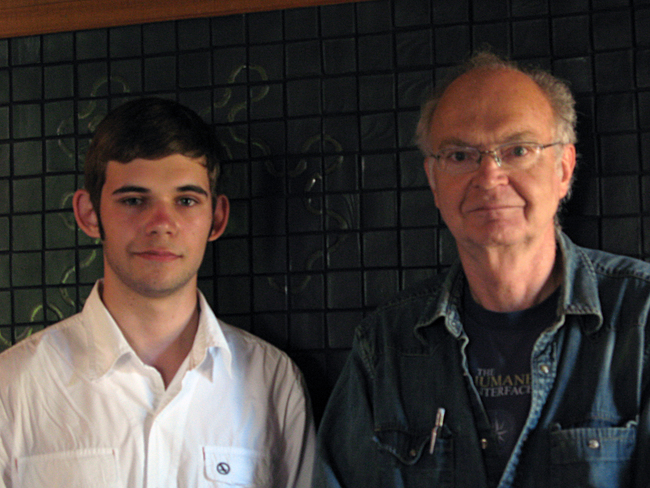 I’ve always wanted to build my own house. I’m an outlier and a software engineer. When I look at most houses I see inconsistent design, lines that don’t align, colors that don’t match, materials that don’t last, inefficient space use,... Continue →