Boston to New York: The True Cost of Driving

It is no secret that I love to drive. It may sound insane to many but I actually enjoy my 30-minute morning commute to work. For me it’s a privileged time when I’m alone, comfortable and can catch-up on podcasts and audio books. Anyhow this post isn’t about that, it’s about the true cost of road trips.

I have flown, taken the train, taken the bus and driven to New York many times. No surprise there: driving is my favorite because it’s the mode of transport that provides the most freedom. So what does it really cost to drive from Boston to New York and back? 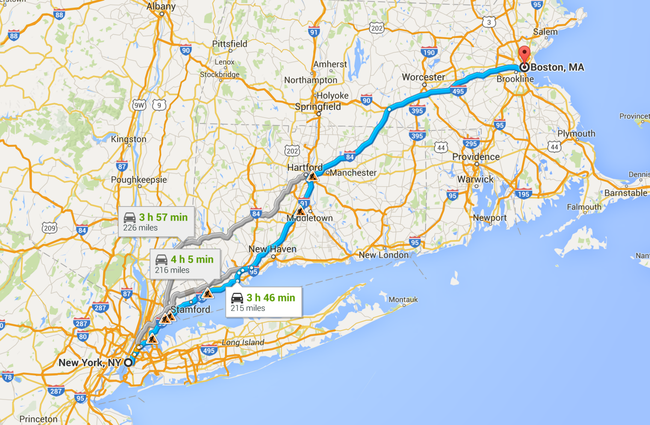 Let’s assume you own an average German car that’s worth $25,000 and has 15,000 miles. It doesn’t matter what brand or what options it has. We know that when it reaches 30,000 miles it will be worth $20,000 (Edmunds). That’s essentially a depreciation of 30 cents per mile. I know it’s not linear but let’s assume it is for this example because a trip to New York is short enough.

Such a German car will probably have an average highway gas mileage of around 30 miles per gallon. If gas costs $3 per gallon, then that’s a cost of 10 cents per mile.

Let’s not forget cars need oil changes. For such a car, German Car Depot recommends an oil change every 5,000 miles. PepBoys charges $32 for an oil change. That’s a cost of about 0.6 cents per mile.

Getting into New York City costs $5.54 in tolls assuming you’re equipped with a free EZ-Pass transponder and you are coming from Boston, according to the MTA website. For a return trip, that would be $11.08.

Tires also depreciate. An average German car may come with Michelin tires that have a 50,000 mile warranty. Such tires will be worth around $250 each, or $1,000 for the whole set. If changed regularly, tires for your German car will cost you 0.02 cents per mile.

Brakes have a typical lifespan of 30,000 miles and will cost around $200 to replace for each wheel including labor (according to YourMechanic). That’s a cost of 2.6 cents per mile.

Finally there is the cost of parking and potential parking tickets, which I will not count since it is so volatile and variable.

According to Google Maps, the road trip is 215 miles or 430 miles for the return trip.

The cost of the trip is:

And the total true cost of driving from Boston to New York and back is $205.44.

I implemented a simple calculator in Javascript to do the math above, you can find it here: tlextrait.com/projects/roadtrip and on GitHub.

I often see developers, team leads, development managers and so on who say they don’t have time for non-programming activities. Because of an aggressive schedule (I don’t know any company that doesn’t have an aggressive software... Continue →